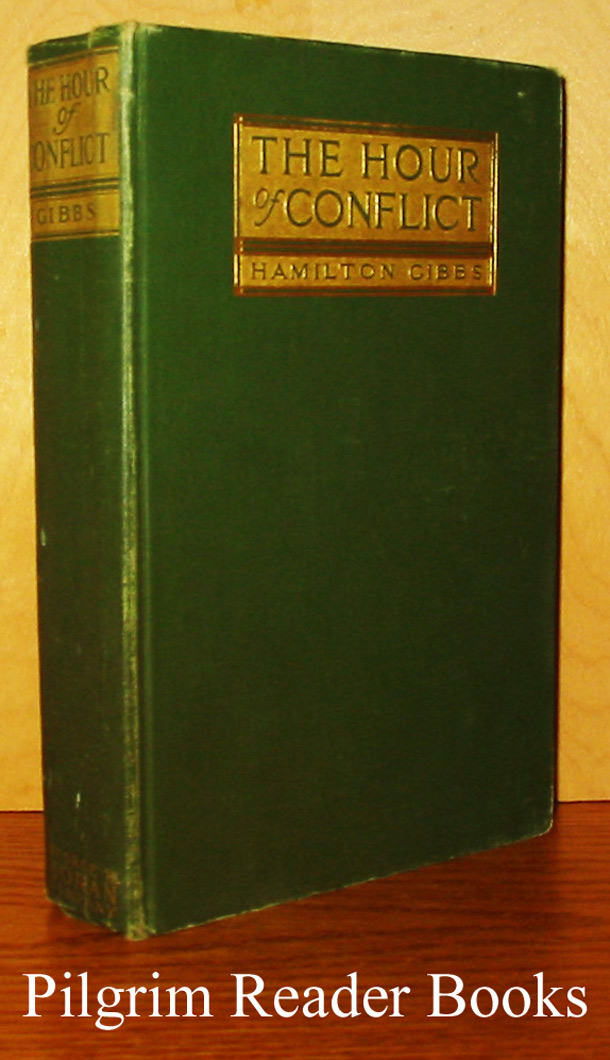 The Hour of Conflict.

12mo - 19 x 13 cm.; 296 pp. Green cloth over boards with with reversed gilt lettering - green lettering in gilded panels on the spine and the front board. Pictorial end papers. From a review of the book published in the Argonaut (a turn of the century San Francisco literary journal) in December of 1914: "When Everard Fortescue Leyden gets into trouble at the university and is sent own he betakes himself to France, ostensibly to study, but actually to play golf and to have a good time. Accidentally he makes love to a village girl, and when he tells her that he must leave her with the usual vague promises to return she throws herself into the sea and he believes that she has been drowned and that he is practically her murderer. Then come the years of remorse and a peculiar poignancy of grief as he realizes that he actually loved Toinette. Eventually he attempts suicide, and in the vagaries of approaching insanity he wanders once more to the little French village with the vague idea that Toinette is waiting for him in the sea and that he must join her there. He does actually attempt suicide for the second time, and by drowning, but he is rescued, and then the clouds suddenly lift and he recognizes the workings of a beneficent fate. The idea is an admirable one, and it is admirably carried out in a novel that is distinctly above the average. The book shows moderate wear to the externals (rubbed and lightly bumped board corners and spine tips) while the interior is clean and the binding is solid. A clear and removable archival cover has been fitted.

Title: The Hour of Conflict.

The Hour of Conflict.