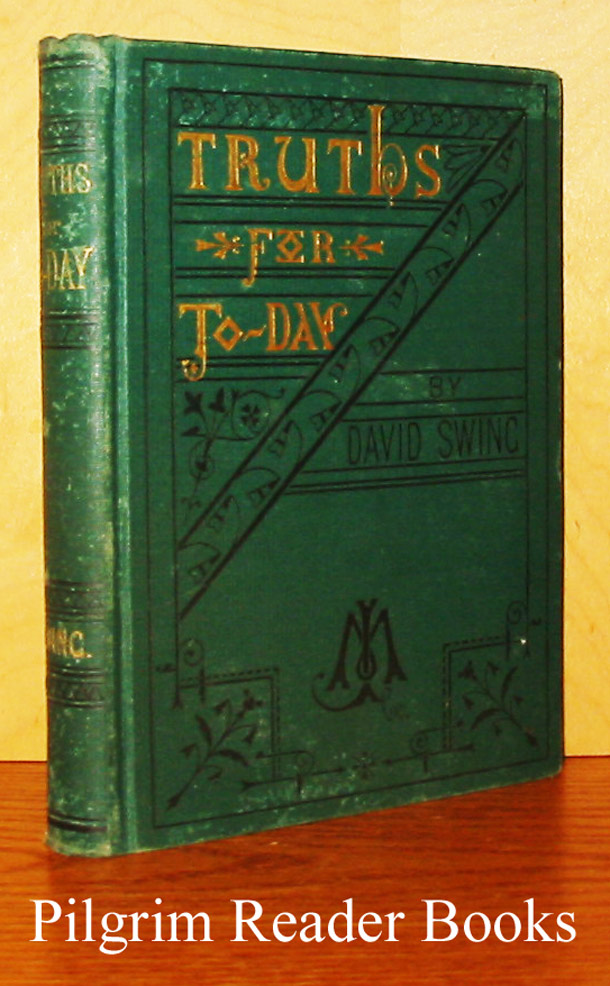 Truths for Today: Spoken in the Past Winter.

8vo - 18.5 x 13 cm.; 291 pp. Decorated green cloth with gilt lettering on the spine and the front boiard. Black decorations on the front board, blind stamped on the back board. A collection of fifteen sermons by Swing, 1830-1894. He subsequently published a second volume simply called "The Second Series". One of Chicago's most popular preahers of the day, he was considered to be heretical by some of his fellow Presbyteriens, he was tried before the Presbytery of Chicago and acquited of all charges. The sermons in this volume are entitled "Religious Toleration or Charity", "The Golden Rule", "Righteousness", "Christianity and Dogma", "Emotion and Evidence", "Good Works", "The Great Debate", "Charles Sumner", "The Lost Paradise", "Positive Religion", "Christianity as a Civilization", "St. Paul", "Faith", "St. John" and "Immortal Life". The book shows moderate wear to the fore corners (bumps and rubs) and to the spine tips. The spine is a tad faded in spots with a couple of faded spots on tne boards also. The gilt lettering on the front is bright and crisp. Both front and back hinges are tender though still solid. The binding of the text block itself is very good. The interior is very clean. A clear and removable archival cover has been fitted.

Title: Truths for Today: Spoken in the Past Winter.

Truths for Today: Spoken in the Past Winter.