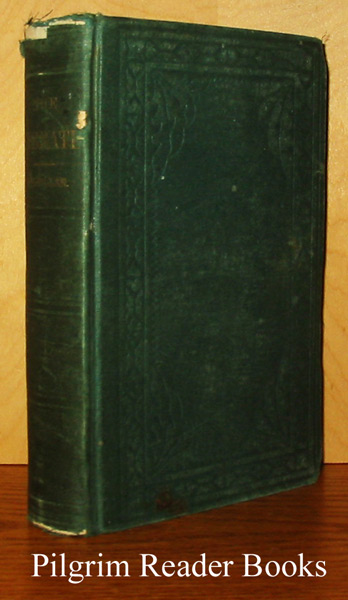 The Sabbath Viewed in the Light of Reason, Revelation, and History with Sketches of its Literature.

8vo - 19 x 12 cm.; xii - 635 pp. Green cloth with gilt lettering on spine. Blind stampings on front and back boards. This edition (1863 from independent sources) was printed from the stereotype plates presented to the New York Sabbath Committee by a John Henderson of Glasgow. It is stated that no revison was made however there is a minor one in that the divisional title pages were not printed in this later and second (American) edition. Extremities are worn on the edges (rubbed through cloth on corners and the spine crown and heel) and the spine is faded. Text block is sound and clean. Not a terribly important historical document other than it does give a true sense of the temper of the times with regards the legal-positivist interpretations of scriptural norms as the work force (common people) were being asked to commit more of their time to an ever growing industrial complex. This was an important enough issue at the time that an American edition (during the Civil War) was deemed imperative. It is interesting to reflect on the timing here as some of the roots of the great American awakening can be traced to the work of these American tractarians. Tractarian movements should always be paid attention to as they sow seeds that others harvest.

Title: The Sabbath Viewed in the Light of Reason, Revelation, and History with Sketches of its Literature.

The Sabbath Viewed in the Light of Reason, Revelation, and History with Sketches of its Literature.