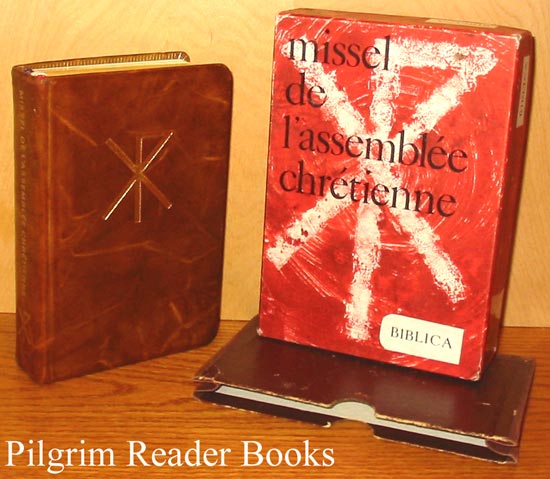 16mo - 15.5 x 10 cm.; xvi - 1871 pp. Tan coloured leather over boards with gilt lettering on spine and a gilt Chi-Rho (PX) symbol on front. This is the second French edition. All text block edges are gilt with rounded corners on the block. Four marker ribbons present. The lectionary text used is that of the "Association episcopale liturgique, Paris" of 1959. The psalter used is the translation by Pere Joseph Gelineau. The Gregorian chant used is courtesy of Desclee & Cie and the introduction, commentary and notes are by Pere Thierry Maertens. The ordinary of the Mass is printed as two columns per page with Latin on the left and French on the right with the exception of the Eucharistic prayers where the left hand page is in Latin and the corresponding French is on the facing right hand page. The annotations by Maertens are marginal and solely in French. Several indices are present: "Tables des themes", "Table des lectures bibliques", "Table des messes" - in eleven sub-indices. The missal shows mild wear to the board edges, the ribbons are unfrayed and the text block edge gilding is still holding some pages together indicating very little use. Present also is the cloth and card sided slip case in brown showing mild wear and also, the original lidded box, again showing only mild wear. A previous owner's name is in ink of the top of the first blank page. Loosely laid in the small card from the publisher describing how to first open the gilded page when the edges are still adhering to each other. A very nice traditional French Catholic missal.