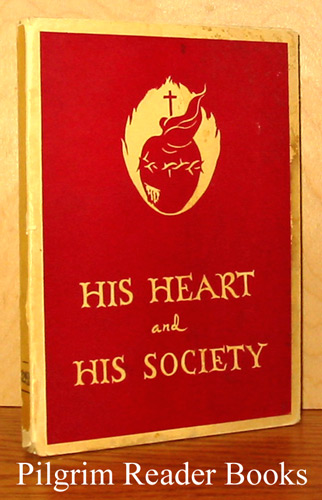 His Heart and His Society: Original Sources on the "Munus Suavissimum".

12mo - 17.5 x 12.5 cm.; [6] - 191 pp. Red and off-white covers with fore edge flaps. From the author's preface: "The handbook is no more than a compilation of documents on the precious heirloom known amongst us (Jesuits) as the 'munus suavissimum'. The first section is mostly made up of letters of St. Margaret Mary announcing this most pleasant charge entrusted to the fathers of the Society. Then follow some decrees of General Congregations in the new Society officially accepting that pleasantest of tasks. Relevant numbers of the Epitome of our Institute, incorporating the legislation on the subject, are also presented here. The third and longest part contains seven letters issued by our Generals during these last hundred years on the Devotion to the Sacred Heart in the Society". The translations of the letters of St. Margaret Mary are by Fr. Herbst. Library pocket on the inside of the back cover, library stamp on several interior pages but not affecting any text, and the covers were detached from the text block but have been previously refastened. Moderate wear and soiling to the externals.; Ex-Library

Title: His Heart and His Society: Original Sources on the "Munus Suavissimum".

His Heart and His Society: Original Sources on the "Munus Suavissimum".