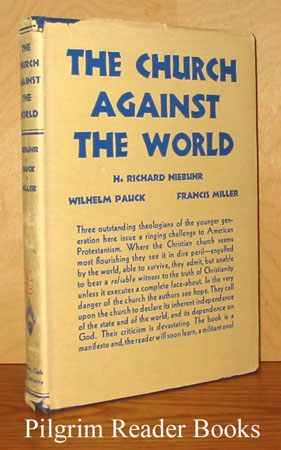 The Church Against the World.

8vo - 19.5 x 13.5 cm.; 156 pp. Second printing. "Christianity, as the authors see it, is threatened not only by the rival religions of captialism and nationalism, but is . . . in America becoming a purely national religion, unintelligible to Christians of other lands . . ." (from the flap). Niebuhr was Associate Professor of Christian Ethics, Yale University; Pauck was Professor of Church History, Chicago Theological Seminary; Miller was Chairman of the World Student Christian Federation. Blue cloth-covered boards with gilt spine lettering. Book is clean and tight with only some dust soiling on text block head; library markings consist of a number on spine, stamps on front free endpaper and title page, attachment on back endpaper. Dust jacket has some soiling, number on spine, chipping on edges.; Ex-Library

Title: The Church Against the World.

The Church Against the World.