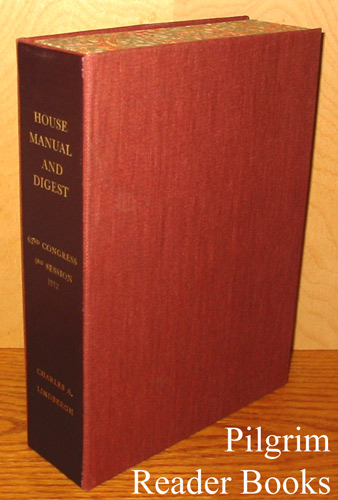 Constitution, Jefferson's Manual and Rules of the House of Representatives of the United States with a Digest of the Practice: Sixty-Second Congress, Third Session. (Charles A. Lindbergh Sr.'s copy)

8vo - 20.5 x 15 cm.; viii - 648 pp. Black leather over thin and flexible boards with gilt lettering on spine and front. This is the "House Manual and Digest" as issued to Charles A. Lindbergh, Sr. upon his taking the oath of office in the House of Representatives as a representati ve from Minnesota. Patterned doublure end papers with a green linen hinge (interior). Front paste down shows remnants of a pasted on typed sheet, a poem by Charles MacKay (Scottish poet - 1814-1889) and the same typed poem ("Keep Gallilee, to thy thought, and nerve the soule to bear; . . .") is pasted in full over the entirety of page 12 of the manual. Inscribed by Lindbergh, Sr. to his son, Charles, Jr., on the front free end paper with the verso of this page having a note to Charles, Jr. from his father. "To Charles A. Lindbergh Jr. Sometime you may be interested to know something of the variety of your fathers sentiments and feelings. More or less of them find expression in the selection that will be found herein - You are not to have these till I give them to you or until I have quit using them because I am likely to add to them from time to time. Your father, Charles A. Lindbergh Sr." This note is in pencil while the dedication on the recto of the end paper is in ink. The manual comes from the estate of Eddie Doherty, a reporter with Liberty magazine. Doherty was working the rewrite desk at the time of the Lindbergh kidnapping and was assigned by the editors to cover the story and subsequent trial. Doherty was a frequent patron of Pete's Steak House in Chicago along with his brother Tom Doherty as were many Chicago newspaper people including Henry and Claire Boothe Luce, both of whom were acquaintances of Eddie Doherty. The manual is disbound (three sections; front to page 248, pages 249 to 486, pages 487 to the end) with the relevant spine sections attached to each section. The yapped cover edges are all but gone with the leather chipped on the margins. Cosmetic and archival repairs have been made to the remaining leather. No further repairs were deemed reasonable given the nature and provenance of the book. The book itself is housed in a custom built clam shell case designed to mimic the appearance of the manual though with different materials: red linen over the 'boards', leather spine with gilt titling and marbled 'text block edges'.; Signed by Author

Title: Constitution, Jefferson's Manual and Rules of the House of Representatives of the United States with a Digest of the Practice: Sixty-Second Congress, Third Session. (Charles A. Lindbergh Sr.'s copy)

Constitution, Jefferson's Manual and Rules of the House of Representatives of the United States with a Digest of the Practice: Sixty-Second Congress, Third Session. (Charles A. Lindbergh Sr.'s copy)