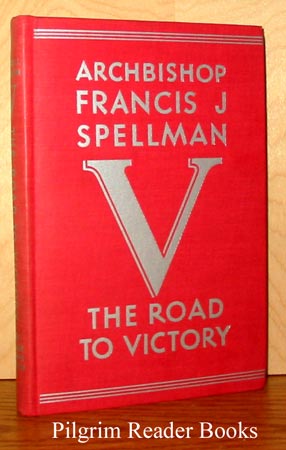 12mo - 19 x 12.5 cm.; 131 pp. Spellman was, at this time, Archbishop of New York and Military Vicar of the Armed Forces. Major Edward Bowes (of radio's Amateur Hour fame, I assume) considered "this book so opportune and important that he has presented copies to those whom he considers the leaders of public thought....the Reverend Clergy, all members of Congress, and the editors of all daily and weekly newspapers .... also placed a copy in all Convents and into every public library in the United States." This from a laid-in leaflet with the letterhead of the National Headquarters of the Holy Name Society. This edition has the frontis photo of Spellman, the verso of which states "Presented with the Compliments of Major Edward Bowes, K.M.", and on the facing page a copy of a letter sent to Bowes by Spellman; spine also states"The Major Bowes Edition". Red cloth-covered boards with silver lettering on front and spine. Spine is lightly sunned, some light scratches across the back cover, a small cloth tear on one corner, an inked number on the back paste-down.