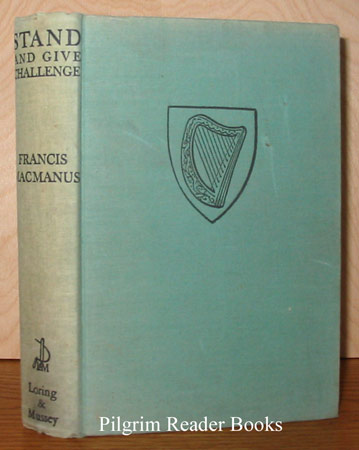 Stand and Give Challenge.

8vo - 19 x 13 cm.; 269 pp. Green cloth with black lettering on spine and black harp on front board. MacManus (1909-1965) was born in Kilkenny and educated both there and in Dublin, graduating from University College in Dublin. He taught at the Synge Street Christian Brothers School in Dublin until he took a positiion with Radio Eireann in 1948 where he headed up the Talks and Features department until his death in 1965. The Francis MacManus short story competition sponsored by Radio Eireann was named in his honour for his achievements as a writer of fiction. (His novel "Candle for the Proud' won the Hammersworth Prize from the Irish Academy of Letters. ) This work, "Stand and Give Challenge", whether fiction or non-fiction, is part history, part biography, part essay and deals with the lives of a few of the hidden Irish when life was not easy as the "nightmare was on the nation". The externals are faded with the spine being more so and the spine crown shows a 2 mm tear. The text block head edge, originally dyed a somewhat dark colour is now faded and dust soiled. The front paste down end paper shows a vertical crease and the front hinge is very mildly shaken. Interior is remarkably clean and the binding is tight. Illustrated with several small and quite well done b/w vignette type engravings. This is the first American edition whilst the true first edition was in Dublin from Talbot Press in 1934 followed very closely by one from Phoenix Publishing of Dublin somewhat later in that same year. A clear and removable archival cover has been fitted.

Title: Stand and Give Challenge.

Stand and Give Challenge.