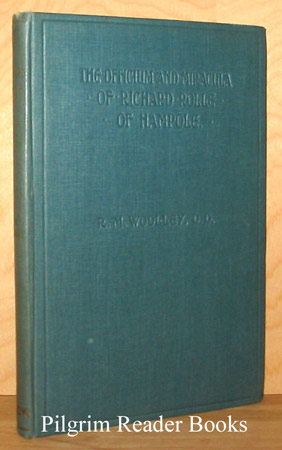 The Officium and Miracula of Richard Rolle of Hampole.

12mo - 18 x 12 cm; 97 pp. Blue cloth with gilt lettering on spine and blind stamped lettering on the front board. Illustrated with photographic reproductions of 3 manuscript plates in black and white. Rolle has oft been called the father of English prose as he wrote in the vernacular long before the times of Wyclife or Chaucer. This may be because he wrote for nuns whose command of Latin was abyssmal so he used the language most easily understood by his readers. Born in the early 1300's, Rolle was educated at Oxford and Paris, eventually returning to live as a hermit in the hills of Yorkshire at Hampole near Doncaster. After his death on September 29th of 1349, stories of his sanctity spread even faster and wider along with testimonies to miraculous cures attributed to him. The book presents 3 manuscripts in the original Latin; the manuscripts being the Cotton MS, the Lincoln MS and the Bodleian MS. These manuscripts were the only ones known at the time of writing that contain the Officium and the Miracula. Previous owner's name on ffep. The spine is quite faded with the externals showing only mild shelf wear. Included and laid loosely in are several pieces of ephemera such as a newspaper clipping from 1949, the sextenary of his death, reproductions of some of the letter illumination, and a map of the Hampole area with a photograph. A clear and removable archival cover has been fitted.

Title: The Officium and Miracula of Richard Rolle of Hampole.

The Officium and Miracula of Richard Rolle of Hampole.