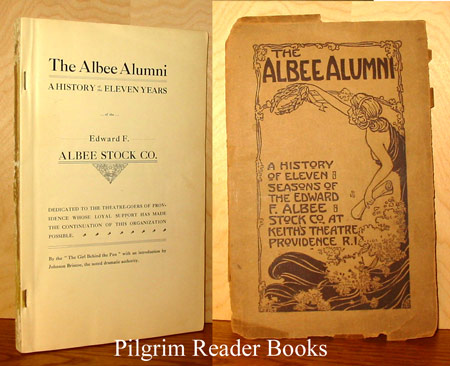 The Albee Alumni: A History of the Eleven Years of the Edward F. Albee Stock Co.

By: "The Girl Behind The Pen". (Introduction by Johnson Briscoe).

4to - 26.5 x 17 cm; 197 pp. After the Introduction by the noted dramatic authority, Briscoe, there is a brief introduction by the author (The Girl Behind the Pen) followed by a yearly report of each season and lots of photos of cast members. The book concludes with the "Casts of the Plays Given by the Albee Stock Company, Seasons 1901-1911". There was a new play each week, from April thru August, at Keith's Theatre, Providence, Rhode Island, so this list is quite extensive. A former owner of this book has written the plays that were presented from 1912 to 1920, in pencil, on back blank pages, the back cover and a laid-in sheet of paper. Albee and B. F. Keith were partners, owning and managing several theatres on the East coast. They strove to promote "polite" vaudeville, forbidding crude remarks and risque costumes, even tried to prohibit rudeness from the audience. In 1906 they established the United Booking Office, in the 1920's they merged with a western chain of theatres to become the KAO (Keith-Albee-Orpheum) circuit, and 1928 found them selling a large amount of their stock to Joseph P. Kennedy's Radio Corporation of America (RCA), establishing the RKO (Radio-Keith-Orpheum). This book concerns the summer stock program Albee started in 1901, rather than closing the theatre for the summer as in past years. Plays were performed each week from broad farce to heavy tragedy and there was a slogan among the actors to the effect "An Albee engagement is the 'open sesame' to Broadway". (This according to Briscoe's introduction). The brown card stock cover with darker brown design and lettering is detached from the text, quite chipped on the yapped edges and missing a part of the spine section; the main body of the front cover is intact with some soiling, the back cover piece has a water stain and the penciled listing of plays. The body of the text is in good shape with some minor damage to a few page edges and two back pages which have been water stained; there are a few bits of marginalia in pencil besides the aforementioned play listing and some very minor soiling. Binding is flat stapled.

Title: The Albee Alumni: A History of the Eleven Years of the Edward F. Albee Stock Co.

Author Name: "The Girl Behind The Pen". (Introduction by Johnson Briscoe).

The Albee Alumni: A History of the Eleven Years of the Edward F. Albee Stock Co.