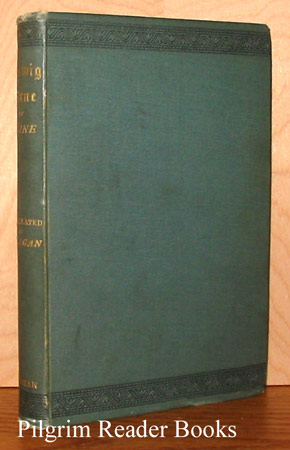 Ludwig Borne: Recollections of a Revolutionist.

12mo - 18.5 x 12 cm.; 189 pp. Grey / blue cloth over boards with gilt lettering on spine. Black border design stamped on the head and tail edges of the spine and the front board, blind stamped on the back board. The externals shows mild shelf wear to extremities. Remains of bookplate from previous owner on front free end paper. The text block head edge dust soiled and quite darkened. This edition is abridged and translated by Thomas Selby Egan. Title page date is 1881 with no additional printings made note of on same or verso. Translator's note ('observation') on following page. Interior is clean and the book is tight. Printed by Spottiswoode and Co. , New Street Square and Parliament Street, London. First published in 1840 as "Uber Ludwig Borne". Egan also translated Heine's "Atta's Troll". When Heine first had this book published, it upset several people to say the least. One of the affronted challenged Heine to a duel on night of all nights, the eve before his wedding to Eugenie Mirat. His remaining days were spent mostly bed-ridden with spinal paralysis. It was during this time that he wrote (or had published) Neue Gedichte, Atta Troll, and several volumes of other writings and poetry. In his will, Heine gave his entire estate to his wife provided she remarry because, as he said in his will, "Then there will be at least one man to regret my death".

Ludwig Borne: Recollections of a Revolutionist.